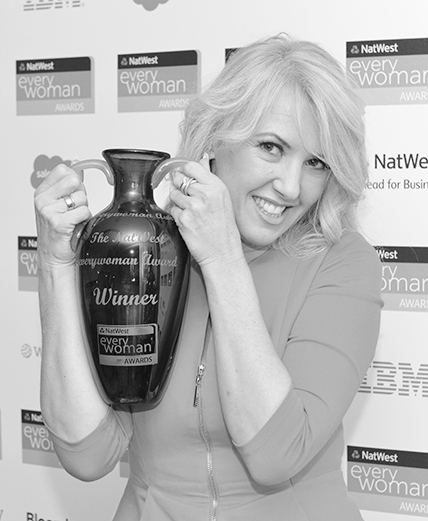 To top off what can only be described as an exceptional year for Karen and her team, she has been crowned the Woman of the Year at the 2014 Natwest Every Woman Awards.

She told viewers “I feel very priviledged to be able to provide courses that shape and mentor people, while driving them forward”.

Having done a fabulous job on live television, she then dashed across the capital for the 2014 NatWest everywoman Awards. To her surprise and delight she was presented with the most coveted award of them all – the Woman of the Year. It encompassed all her achievements as an entrepeneur with her empire that encompasses Karen Betts Professional and Nouveau Beauty Group, including a pioneering medical tattooing enterprise, several leading cosmetics brands and a salon training business.

“This woman is phenomenal”, judges commented when agreeing she had led her companies to outstanding success, growing them from a small office in Yorkshire to an international team of 182 employees with a turnover of £7 million.

Karen said: “Huge thank you to my PR and Events Manager, Lynsey, for believing in me and nominating me without my knowledge – I’m humbled.”

At a glittering ceremony at The Dorchester Hotel in London, hundreds of inspirational women congregated to celebrate the success of female-owned businesses across the country at the Natwest everywoman Awards. Now in its 12th year, the Awards has become the defining event for Britain’s female entrepreneurs.

Today’s ceremony reveals the stories of individuals, whose qualities and acumen have driven their success, applauding their achievements and creating inspiring role models.  Significant progress has been made to increase the influence of women in business and the UK now leads the way in Europe for entrepreneurship.

Fill in your details and we'll get back to you.

Don't miss a thing. Get the latest Permanent Makeup news and more Delivered Direct To your inbox.

With an artistic background in Media and Special Effects makeup, Fern has a fantastic eye for detail when it comes to Microblading.

Fern has been with the Nouveau HD Beauty Group for many years. She began her journey at our sister company, HD Brows, where she took on the role of Elite Trainer – teaching the importance of fabulous brows to the brow artists of tomorrow.

Soon, Fern became the Training Manager for HD Brows and enjoyed a successful career. As Fern’s love for HD Brows grew, she decided to train in Make Up by HD Brows – a professional makeup artistry course.

After a natural progression, Fern began to work with K.B Pro – our permanent makeup and microblading training academy. After working as a Training Mentor to students, Fern began to consider expanding her skills after seeing first-hand the life-changing effect of amazing brows. Fern went on to train in K.B Pro Microblading so she too could offer her clients an amazing confidence-boosting treatment. Completing courses in teaching, coaching and assessing, Fern has really dedicated herself to her passion.

Perfecting her Microblading skills over time, Fern now has a fantastic base of happy clients.

You can find Fern at our Yorkshire clinic where she specialises in Microblading treatments, and at our Cheshire clinic once a month.

Geraldine initially worked for one of South Africa's leading aesthetic medical clinics before continuing her career alongside Karen in London's prestigious Harley Street where you can find Geraldine performing a variety of permanent makeup treatments.

Geraldine prides herself in exceptional client care: from the initial point of contact through to the completion of the treatment. A trusted member of the team, most of Geraldine’s client base has been established by happy clients who have referred their family and friends to experience Geraldine’s fantastic treatments.

"I feel truly blessed to have found my passion in life. I am in such a privileged position to help and support clients who have experienced hair loss or trauma to their skin as a result of hormone related disorders, surgery, vitiligo, alopecia and cancer. I also assist clients in the pursuit of correcting and perfecting their over-plucked eyebrows and who want to have the ease to 'get-up-and-go' in our fast-paced society. I feel honoured to share my gift with my clients and it is inspiring and rewarding to see the positive effects my treatments have on them."
- Geraldine

We say that you never stop learning in this industry, and Sharon is a great advocate of this! Passionate about developing new techniques, Sharon loves working to be at the forefront of the latest permanent makeup innovations. She’s particularly interested in skin and brows and has a wealth of knowledge on these topics which she passes on to her clients and students alike.

Coming from a background in education, there’s no wonder that learning and developing is at the forefront of Sharon’s work!

Her keen eye for detail makes her a fantastic permanent makeup artist, and her enthusiasm is so contagious. In fact, clients often tell us that Sharon has a wonderful, calming effect on them which instantly makes them feel at ease ahead of their treatment.

In her spare time away from the clinic, Sharon loves to read and spend time travelling to new and exciting places.

Vikki joined the Karen Betts Professional team over seven years ago as Karen’s PA, but after completing a lengthy personal training programme with Karen, Vikki soon went on to embark on a highly successful career in permanent makeup.

Vikki has an avid interest in permanent makeup, and has a background in beauty therapy and makeup artistry – she was always destined to have a career which allowed her to be creative and help others to look and feel amazing.

Vikki says: "Karen is fabulous to work for – she’s a real character and she changes people’s lives with the work that she does. I love being part of her team and I love being a Karen Betts Elite Artist!"

Jordana joined the Karen Betts Client Services team over 8 years ago, fresh from her university graduation.

With a fantastic eye for detail for her brow and eyeliner treatments, Jordana quickly built a loyal client base and is frequently the topic of glowing reviews.

Gemma has been in the beauty and aesthetic industry for over 14 years – because of this, she has a wealth of experience and is such a trusted member of the Elite Team.

Her attention to detail is second to none, and she’s a self-proclaimed perfectionist. She loves meeting new people and giving them an amazing treatment experience in our Yorkshire, Cheshire and London Harley Street Clinics.

Whether it may be brows, eyeliner or lip treatments, she’s passionate about the career she’s chosen and loves the transformation her clients see when they look in the mirror. As well as working as an Elite Artist, Gemma is also a trainer at our permanent makeup academy, K.B Pro.

Helena became fascinated with Permanent Makeup after having a brow treatment herself from one of our Elite Trainers.

After training and perfecting her skills, Helena opened and runs her own successful business, Helena Jane Permanent Cosmetics, alongside working with Karen Betts Professional.

Now, Helena splits her time between her own clinic and our Harley Street clinic in London. She also teaches at our K.B Pro Academy in Milton Keynes.

Helena lives and breathes permanent makeup, so there’s no wonder she has a loyal base of clients who love visiting her for her brows, lips and eyes treatments.

"I feel so passionately about the way permanent makeup can transform lives, whether its saving precious grooming time, or giving someone with hair loss or unsteady hands their confidence back. The sense of satisfaction is amazing. I get a real buzz out of helping other technicians hone their skills as they set out on their professional development journey, as I did myself, with Karen Betts Professional."
– Helena.

Tamara joined K.B. Pro Team in September 2017. Having completed BSc Honours Degree in Computing and MSc in Creative Multimedia Tamara worked in computing environment for years. However being a people person she realized that she no longer enjoyed spending all her days in front of the computer.

While undergoing permanent makeup treatment on her brows she realized that performing permanent makeup procedures was something she would enjoy. So she entered the world of cosmetic and medical tattooing training with Nouveau Contour, Karen Betts Permanent Makeup Academy and within just over a year got from basic foundation to Elite level.

Tamara is a real perfectionist and combines her meticulousness and an eye for detail with a true passion for creativity.

Tamara says ‘I’m delighted to join Karen’s team. Since I discovered the world of cosmetic tattooing I’ve never looked back. I enjoy every minute of working with clients and making them feel special. I feel privileged to work in the profession I absolutely love. I feel I finally found my vocation.’

Tamara will be sharing her time training K.B. Pro students in Milton Keynes Academy, performing treatments in K.B. Pro Harley Street clinic and working in her own clinic in London.

Carrina was inspired to become a technician after working at the Natural Enhancement Academy as a Clinic Sales Co-ordinator. Here, she developed a passion for permanent makeup, and a vast knowledge of the micropigmentation industry. She trained as a permanent makeup artist and went on to work in Harley Street at a well-known permanent makeup clinic where she also trained in Microblading, along with running her own successful business in Hertfordshire.

With a background in art, as well as abundant experience in customer service, Carrina is naturally creative and combines her passion for design with her passion for people. She provides feature-flattering enhancements that make her clients feel confident from the inside out.

Carrina’s favourite procedure to perform is Brow microblading. She says: "I love the satisfaction of completely transforming a client’s face with a well-shaped, natural-looking brow enhancement - knowing how much of a difference it is going to make to how they feel daily. Everyone deserves to feel their best, and I love knowing that I’ve contributed to that."

Naomi has a natural eye for detail which is evident from her extensive client list. Her creativity. enthusiasm and technique for enhancing natural beauty so flawlessly is incredible.

A stickler for excellent customer service and client care, Naomi is attentive and professional, and always puts the client experience above anything.

"Being able to transform people’s faces and self-confidence daily with the power of permanent makeup is beyond rewarding. I feel very privileged to be part of Karen’s Elite team and I am so passionate about everything that the K.B Pro brand represents - from their state-of-the-art pigments, equipment, needles, education, and truly exceptional client care right through from the consultation to the aftercare."
- Naomi

This website uses cookies to improve your experience while you navigate through the website. Out of these, the cookies that are categorized as necessary are stored on your browser as they are essential for the working of basic functionalities of the website. We also use third-party cookies that help us analyze and understand how you use this website. These cookies will be stored in your browser only with your consent. You also have the option to opt-out of these cookies. But opting out of some of these cookies may affect your browsing experience.
Necessary Always Enabled

Any cookies that may not be particularly necessary for the website to function and is used specifically to collect user personal data via analytics, ads, other embedded contents are termed as non-necessary cookies. It is mandatory to procure user consent prior to running these cookies on your website.